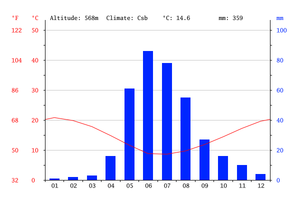 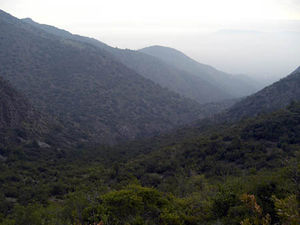 Apoquindo Valley from the final zigzag, photo taken towards the east. 10/07 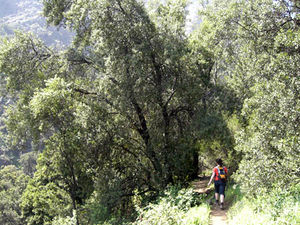 In the Mediterranean forest. October 2007 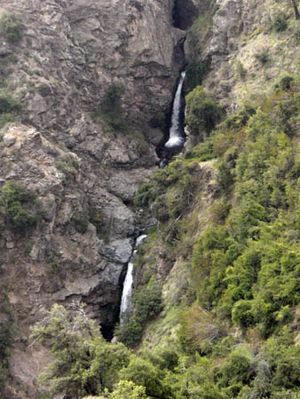 El Encañado Waterfalls, from the viewpoint. Do not confuse with the final destination. In the Salto del Apoquindo you can reach the foot of the waterfall. Photo taken towards the north. 10/07 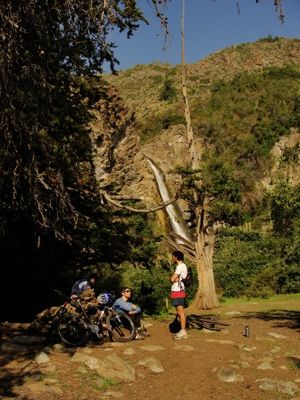 Inmediations of the Apoquindo Falls, place of rest

All year round but it's best in the spring when the river is at its fullest and the flowers are out. It is a good option in summer as there is plenty of access to water, shade from the trees and places to swim.

You must go up Valenzuela Puelma street until meters before crossing with Onofre Jarpa, to the facilities that Aguas Andinas has in the valley.

You can get to Valenzuela Puelma with Father Hurtado, from Francisco Bilbao with Vespucio you should take the D08 towards the east. From Padre H. with V. Puelma you walk or maybe a collective or taxi can take you to the outskirts of Aguas Andinas another alternative From Metro Principe de Gales take the micro 412 southbound and get off at Valenzuela Llanos with Principe de Gales and walk to Onofre Jarpa. 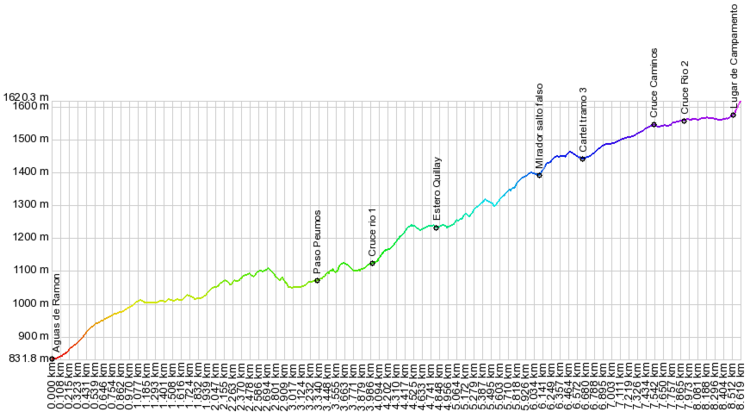 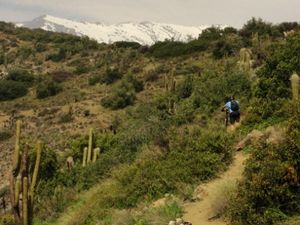 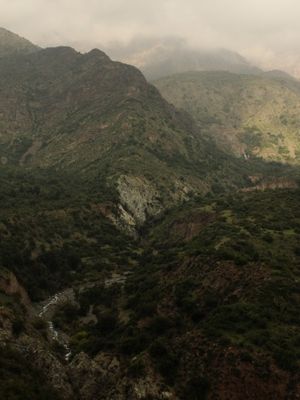 Salto del Apoquindo in the distance, seeing from the trail. Looking E

WARNING - Parque Aguas de Ramon, the way out detailed in this description offically shuts on the weekend at 2:30pm (although we managed to get out of the bottom part easily enough) and is only open weekdays on request. However if you start from here you will have to pay to enter CHP$1500

The route I've chosen is a mixture of the two Spanish versions on this site. Having done both I think this is by far the preferable option as it does not involve the boring walk out to Carpay, hopping a private property fence and negotiating your way back through a gate to a bus stop. Part of this walk that you miss on the other option is also possibly the most beautiful part.

I started in San Carlos but you can start at either point. From the stadium you take the first right you come to along a wide dirt road. Where there is another major branch in the road take another right. You should be on a dirt track that eventually becomes a thin but well used trail. It swings to the left heading for the saddle between Morro Las Papas and Alto las Vizcachas, the two hills in front of Cerro Provincia.

This is the point where most of the height is gained and it feels as though the path is going up Vizcachas until a small open clearing where the trail leads down the other side. There is a rock arrow on the ground to guide you. Here the path drops somewhat and heads along the side of the hill and into the beautiful central valley below San Ramon. Once you’re into the valley the way is obvious as you can see the waterfall up ahead.

The waterfall itself is pretty spectacular for something so close to Santiago, with pools to paddle in and a campsite, just don't expect solitude on weekends. From the campsite you now head south along a wide dirt path. A faint path off to the left leads to views of another two falls beyond. Follow the dirt track down into a steep river gully and back up the other side. From here what you follow was obviously once a dirt road leading to the river at various points presumably to install the strange rather pointless concrete walls that dot the banks of the river at various places. 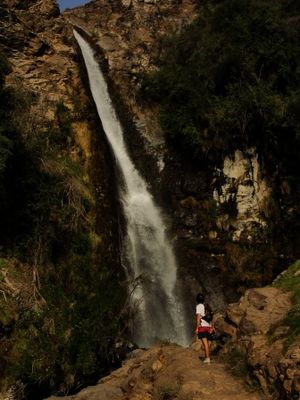 From here you have three choices, you can carry on up the river to another viewpoint of the waterfalls beyond, you can follow the main track out to Carpay or you can follow the track leading down the river, the way I will describe. This trail is marked out by green posts but it seems little used. Follow the track above the river until you get to a big board with wildlife information on and one strange little sign of a set of 5 about childhood behaviour! The narrower continuation of the path is on the left and winds its way down a steep narrow gully. This part of the walk is extremely easy to navigate as it is straight down the gully into Santiago. It is possibly even more impressive than the main falls with many smaller falls all down the river, some which you can reach on foot. The only problem is the river crossings which can be difficult due to the speed at which the river flows. Later on down the trail there are two options of path but they both lead back. At the end of the route there is a conaf station and a picnic area. Either here or if it is shut further down the track in the compound you can get out onto the road, hopefully! It's about 15mins down the road before you hit calle Padre Hurtado where you can get the D08 to Francisco Bilbao metro station. 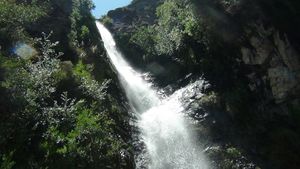 At a leisurely pace