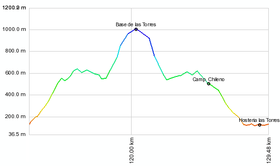 Profile of the section 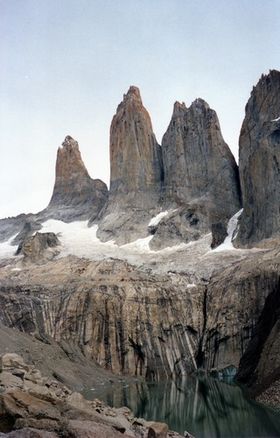 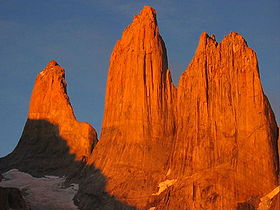 Torres del Paine from the viewpoint, by Tetsuya 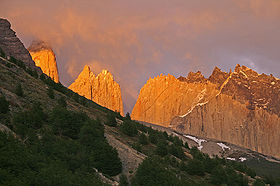 Las Torres at dawn from Chileno Camp, by Carlos Alcolea

This is by far the most popular walk of Torres del Paine National Park. It can be crowded from late december to the end of february. The trail is, therefore, very clear. From Hosteria Las Torres, the path penetrates into the valley. After 10 minutes, an old suspension bridge crosses the Ascensio river. About 150 meters further you will find a bifurcation: to the left it leads to the our destination, and on the right it heads towards Los Cuernos and Valle del Francés. Then, it follows a zig zag in a slope sparsely vegetated and very well marked. The lack of vegetation and high traffic has badly eroded the area and formed several parallel tracks, so take care to keep in the main track and avoid further erosion. The there is another trail at left that leads to Los Cuernos. You gain near 375 meters in this section (from 135 meters to about 500 m.). Then there is a drop of 50 meters, after which the path becomes far less steep. Consider about an hour to this spot. You will then cross a spring. After 45 minutes from the end of the zig zag, Chileno Camp is reached, on the opposite bank of the Ascensio river, in the shade of a lenga forest. There is a bridge to get there. The camping costs $ 4,000 per person and there is a cafe, but no store.

No need to cross the river because the trail always continues along the southwest bank. In the following section, the trail gets into the forest of lenga, with a fairly moderate slope. It crosses several small streams that drain the north face of Almirante Nieto. After about 70 minutes from Chileno, at 700 m., the foot of the moraine that gives access to the lookout is reached. There is a sign indicating the trail to the lookout and fork to Las Torres camp (with toilet). The last leg of the hike is far steeper. Continue next to a stream, under the shade of small trees located on the edge of the moraine. Further up, the trail dissapears and you will have to walk over the bare rocks, some of which are marked to show the route. After 45 minutes from the sign "700 meters", you will be at the east end of the lagoon. The landscape is wonderful, with the three towers (Central, Monzino, De Agostini) in full view, and the mountains Peineta and Nido de Cóndores.