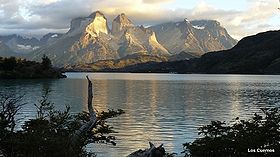 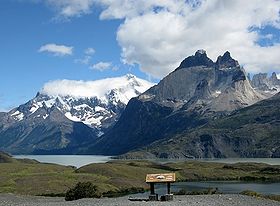 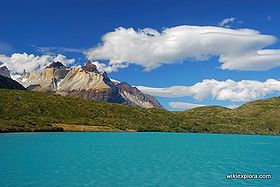 From Refugio Paine Grande, continue towards Valle del Francés (or "French Valley") along a clear path that runs along the northern shore of Pehoe Lake. Within a few minutes there is a slight rise that hides the lake behind us. Appreciate the Cuernos del Paine ahead (2,600 m the highest). Then the trail becomes winding, and enters a flat area, with little vegetation due to the persistent wind. Then a stream is crosseb with a wooden plank.

The trail passes at the foot of Punta Bariloche (2,600 m). After 30 minutes Skottsberg Lake appears, known for occasional wind eddies that form in its waters. The trail continues along the western bank of the lake, overlooking the Paine Grande (3,050 m.), the southernmost "threethousand" of America. A small waterfall and some glaciarettes are visible on the left. Several springs come from the hillsides and cross the path. In one of them, there is an orange arrow that shows the way to a more comfortable path.

After walking 40 minutes along Skottsberg Lake, the end of it is reached. At that point there was a dense forest of lenga and coigüe de magalllanes, which unfortunately burned in the fire 2011-12 (although there are still burned trees). The trail ascends slightly, and there are some wooden steps. Fifteen minutes later, you will pass a small pond on the right. There are several wooden walkways. After another half hour of hiking, you will appreciate the full scale of the Paine Grande Massif, with its majestic ice. In this area the trees form larger and denser forest of notros. After crossing the Francés river by two suspension bridges you reach the camp Italiano, located at 220 meters above sea level amidst a beautiful forest of lengas. The setting of this camp is beautiful, facing Paine Grande and the Francés Glacier. It's free and there are toilets. From here you can continue into the valley, one of the most beautiful corners of the park. The ideal place to fully enjoy the area is to camp. 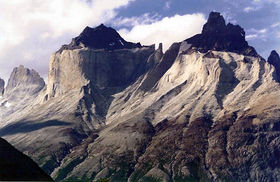 The route into the Valle del Francés (the intermediate vertical stroke of the "W") begins at camp Italiano, where the path moves northwards along the eastern bank of the Francés river. Once out of the forest, it climbs up trough a rocky terrain. There are many stones painted with orange marks. After 25 minutes, the Nordenskjold Lake appears on the horizon, at a point where there is a deep ravine with water at the bottom. The track then climbs a rocky area with both Francés glacier and Paine Grande visible on the left. About 10 to 15 minutes later you come to a sharp rise, well equipped with fixed ropes. It then continues along a ridge through a forest of lengas. To the right there is a little depression, behind which the walls of the Cuernos del Paine (2,600 m) rise. Marching for another hour, a stream is reached. The orange marks persist on the right. The trail goes up sharply, along a stream. From there, it follows by a lenga forest. 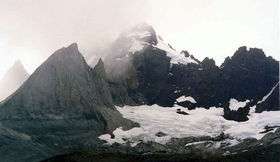 After 1 hour and twenty minutes from the camp Italiano, you get to an open and windy place, called "Mirador" (680m), from where the valley is dominated. To the east, Hoja (or "sheet", 2,200 m), Espada ( or "sword" 2,500 m) and Fortaleza ( "fortress", 2,681 m) are visible. Heading south, Nordenskjold, Pehoe and Toro lakes are also visible. Soon, the trail returns to the forest shade. Hopefully, you will hear the fall of some serac falling from Paine Grande. The trail continues under the shade of the trees keeping the altitude, parallel to the river. The notorious Aleta de Tiburón ("Shark's Fin", 1,717 m), so named for its shape, can be appreciated. There are marks on the trees now, and the path climbs gently. The trail then leaves the forest to an open, marshy area, which constitutes a second viewpoint. Oranges marks become the guide to reentry the forest.

After more than an hour from the viewpoint, the Británico camp is reached. It lacks services, but it's free, and an excellent place to camp. Only five minutes after that, you pass through an area of ​​white stones. Then the trail climbs a steep and rocky sector.