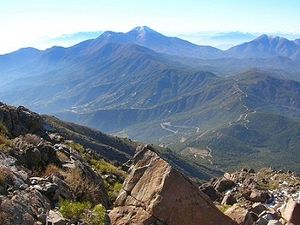 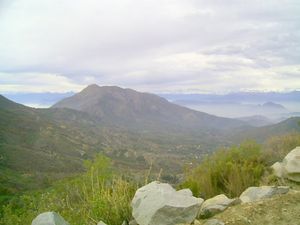 Caleu (in mapudungún: Ca - leufú : another River) is a town of the mountain range of the Coast of 651 inhabitants located to 69 kilometers of the city of Santiago. Belonging to the municipality of Til til, Province of Chacabuco and Metropolitan Region. The town is located at the foot of Cerro el Garfio, which reaches an altitude of 1968 meters above sea level and Cerro el Roble at 2222 meters above sea level. From the top of El Garfio you can appreciate a 360 degree view of both the Andes mountain range and the Coastal mountain range. This visual spectacle calls us to the contemplation and appreciation of such a striking natural environment. The main visual landmarks are the view of El Roble hill and Mount Aconcagua. It is also important to highlight the atmosphere of the town of Caleu, a rural area where you can still feel the tranquility and kindness of those who live surrounded by hills and trees.

All year round, it is recommended not to climb on a rainy day given the stony of the hill. If you ascend on a sunny day it is essential to have solar protection and water ration.

From Santiago you should take a bus at the La Paz terminal (AV La Paz 302 General corner of Lastra) with a useful address (1600 pesos one way), they leave every half hour and less from 07: 00 in the morning until 21:00 at night. Once we get off at Til til there are three possibilities to get to Caleu: bus (leaves at 07:00, 12:00, 15:00 and 18:00, and has a cost of 1000 pesos), take a taxi ( charges 9000 pesos) - both can be taken outside the supermarket unimarc (AV. Arturo Pratt) - or hitchhiking. I recommend the latter as it is done and it was very fast and you will learn from the area with the people and their customs. To start making "finger" you must walk along Avenida A. Pratt until you reach an area where baked ovens are sold and that has a sign that indicates the route to Caleu, route G-16; for this we must get to the junction with the G-102 route which will take us to Caleu, if you get to Rungue esque you will pass by.

ojo: Another option to get to Til til and return to Santiago is to take a bus from the Metro Vespucio Norte (for 1000 pesos each trip).

There are several routes to climb El Garfio hill, in this map two are proposed with the idea of ​​forming a circuit or that you can choose the path. (A) The ascent starts at a half moon (at 1077 masl), from there you have to follow a well-marked vehicle route always going to our right. After walking a little over a kilometer on this road (and before it is over) we started the ascent and then after climbing a little you see the path of a trail of muleteers which you have to follow, entering the hill. Having as a reference a broken to our right hand which should never cross because it takes us away from the road and denotes danger. After a two-kilometer walk, we cross a gate and arrive at a Puemos forest (at 1366 masl); by this one begins a steeper ascent following the trail of the muleteers, crossing the forest and from there the ascent continues until reaching the top of that arm of the hill (at 1612 masl). From here we follow the summit line until we reach a fence and a little above a beautiful specimen of Quillay, then we just have to follow the path of the fence to reach the summit of El Garfio (at 1968 masl). The estimated time from the start to the summit is 3 hours traveling 4,88 kilometers, approximately. Once at the top you can see a huge section of the Andes and a spectacular view of El Roble hill (neighbor of El Garfio) and other peaks of the coastal mountain range. You also have a view of the valley of Til til and Caleu, and in the distance you can see the smog of the capital. (b) To carry out the descent that is proposed here, follow the path marked by the fence posts (always extending it on the right when descending). In this descent sometimes the footprint is lost and you must go - carefully - descending without ever crossing the ravine that we have on the left. The reference point is the high voltage poles that cross the bottom, to which we must reach (at 1269 meters above sea level). Once down a road starts by a car track for about 2.67 kilometers until you reach Route G-102.

There is no signage and the footprints in many parts are lost but it is not difficult to follow the path if we take into account the ascending and never enter or go through streams. The road sometimes becomes complicated by scattered stones so it is good to maintain a firm step and to constantly look up to be aware of any possible collapse. At the moment that the summit is already visible, the road becomes more stony and in the last 40 meters it is almost pure rock, for which we must be very attentive and always see where we will take the next step.

The hill belongs to an agricultural group, there is no good information on access. It prevents people from going up because there is no rescue system in case of an accident so it is each explorer who is responsible. The contact number with the group is: 942062233.

The hill belongs to an agricultural group in the area, but there is no more information about access and permits. Some obstacles are put because they do not have a system in case of accident so a possible accident is under the responsibility of each explorer. The contact number with the group is: 942062233.

There are no guided tours to Cerro el Garfio.