A lovely walk through the middle of Lago Uru Uru allowing views of the many birds and life which occupies the lake. Quite flat but at 4,000 m, it is a good way to acclimate to the elevation and experience the remnants of an ancient lake. 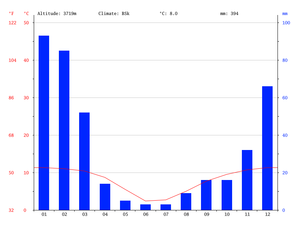 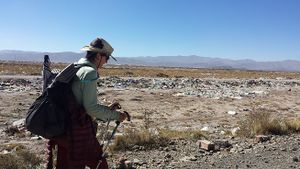 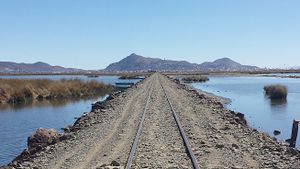 View north from the route of Oruro 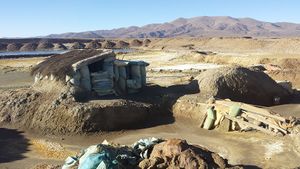 Year round, weather dependent. Said so, june to august are the driest months, and the best season to walk. Because of the altitude, Oruro is cold at night year round.

Park on either end of the route on RN 1, though your vehicle may be easier to access and less likely to be robbed if left in Machacamarca

Take a taxi to the point where the railroad track meets the end of the city. Taxis in Oruro are very, very cheap.

Optional: Walking out from Oruro it would be straightforward to begin from the Central Terminal station, 1 block from where you will find the railroad track which the route follows.

Th route ends in the town of Machacamarca, at a roundabout where all the "minis" (public transportation white vans) depart. Returning to the city it cost less than 4 Bolivianos on one of many minis which leave frequently throughout the day back to Oruro, near the terminal where the route began.

This route is 25 km long of lovely, easy, flat walking, passing through the heart and markets of the city of Oruro, out past the edges of town, then along the railroad burm which departs to the south of the city. The entire route follows the railroad tracks so it is easy navigation.

Leaving the city you will see the large amounts of trash which are thrown into the lake for lack of proper disposal options and awareness. This section was not lovely but interesting, in a smelly kind of way.

The route then passes a few homesteads and then out through the reeds. The level of the lake varies greatly with the season, though the locals report it never rises over the railroad tracks so this walk is a safe option if weather permits. On very low water seasons a road appears alongside the railroad track which may be an alternative if you are there at that time and a way to get closer to the birds' habitat.

Out on the waters of the lake birdlife was abundant, a birdwatchers delight with many ducks, flamingos, hawks, etc. Fish and fishermen can be seen along the way, as can farmers, with their animals out grazing in the shallows.

Trains are infrequent during the day so the passage is largely yours, though it is important to remain attentive.

Approaching Machacamarca we saw a complex of small, private mining operations which were actively being worked and an intersting insight into the mining culture of the country.