In the huge ash field 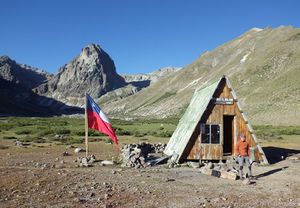 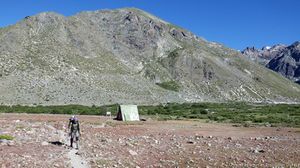 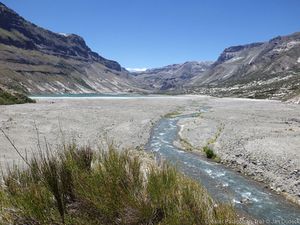 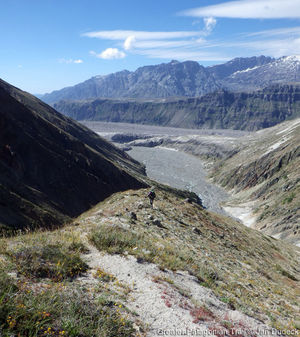 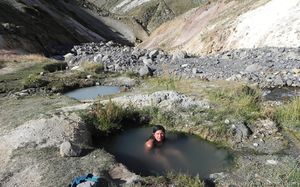 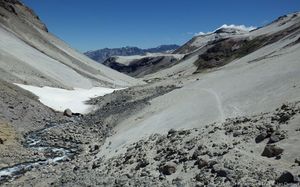 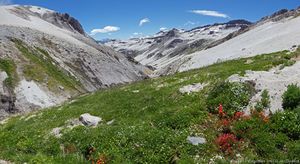 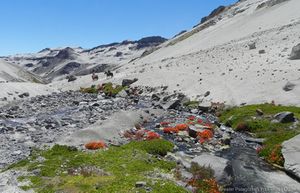 The first stage of the Greater Patagonian Trail gets you right into a mind-blowing volcanic theatre. The landscape is transformed by numerous powerful eruptions of the volcano Descabezado Grande and it’s equally potent smaller brothers in the surrounding. During the last major outbreak in 1932 the Quizapu; a parasitic crater 6 km south of the main crater; vomited an estimated 25 cubic kilometer of lava and volcanic ash.

After leaving the forest you will step through endless fields of pumice, climb three passes and cross a 4 km wide lava river. The struggle is rewarded with amazing outlooks, deep blue lakes and lagoons that suddenly pop in a surreal scenery and two thermal springs. Here you can soak up heat during a freezing night while admiring a sky full of stars. You can even cook your meal on one of the hot steam vents.

As an option your may climb to the 3900 m high summit of the “Great Decapitated”; this is what Descabezado Grande means. It’s a demanding long but technically uncomplicated ascent.

You can also explore two hidden lagoons; one that fills an ancient crater and a second one that was dammed up by another smaller volcano. Both lakes are not far of the trail near a scenic camp site.

Here you can see plenty of images of section 1 of the Greater Patagonian Trail that are uploaded to Panoramio and Google Earth.

This traverse is best be hiked between December and April. After a mild winter with less snow than usual you may already set out in November but be aware that some rivers may be impassible high during snowmelt (in particular GPT01-WP018 and GPT01-WP019). If you plan to get up to the summit of the Descabezado Grande without carrying crampons you should have better chances at the end of December or later when most of the snow is gone.

The isolation and the high passes make this a rather difficult but rewarding trail. Good orientational skill are required because hardly any signposts are placed and some parts of the trail are cross country.

The trail can be hiked in 6 days but plan some contingency in case of bad weather or if you suddenly fall in love with one of the amazing places on the route. If the climate does not favor you, than you should not attempt to cross the passes. In this region bad weather normally does not last long so you are probably better off siting out a bad day.

If you are tempted to get up to the summit of the Descabezado Grande (GPT01-WP028) add two more days. The climb can be done in one long day or split up in two days when camping one night a bit further up.

This traverse is best be hiked between December and April. After a mild winter with less snow than usual you may already set out in November but be aware that some rivers may be impassible high during snowmelt (in particular GPT01-WP018 and GPT01-WP019). If you plan to get up to the summit of the Descabezado Grande without carrying crampons you should have better chances at the end of December or later when most of the snow is gone.

The treck can be hiked in either direction but doing it from South to North requires an entrence permit from the hydropower station Cipreses (See Permits and Entrance Fees). Therefore southbound is the recommended direction.

CONAF does register all trekkers at Parque Ingles (GPT01-WP004) but does not charge an entrance fee. Camp fires are not permitted within the national park that reaches from Radal (GPT01-WP001) to the Laguna las Ánimas (GPT01-WP013).

If you want to see the cascades Siete Tazas about 7 km after the start in Radal you are charged a rather high entrance fee depending if you are a national or a foreign tourist. If you don’t want to spend the money and the time don’t worry; you will see plenty more cascades for free on the Greater Patagonian Trail.

If you wish to hike this trail in reverse from South to North you need to request a entrence permit in advance from the hydropower station Cipreses. If you hike the trail as described from North to South you will enter the property “from behind” without noticing it. Once you reach one of the permanentely manned gates they can’t send you back over the mountains but need to let you leave the compound. In contrast, if you try to enter without a permit you are probably turned back.

The last settlement on the trail is Parque Ingles about 10 km after Radal. This is also the last opportunity to spoil yourself with a good meal in a restaurant and to buy some goodies. On the trail that follows are only two occasionally used puestos; one at the Termas de Azufre (GPT01-WP020) and a second one at the Base Camp Descabezado Grande (GPT01-WP024).

The first 20 km from Radal to El Bolson are a popular hiking destination for national tourists. Some go up to the Laguna las Ánimas but few continue beyond this point.

Hardly any hikers take the scenic trail from the Base Camp Descabezado Grande via the Laguna Caracol to the hydropower station Cipreses. It’s a hidden gem.

You need to carry all the food for the entire trail. There is no food supply after Parque Ingles. If you meet arrieros at one of the Puestos you may ask for some goat or lamb meet but if you are not ready to take an entire or at least half an animal they may be reluctant to sell.

Refill your water supply at the marked river crossings and the camps. In between these waypoints your will find only ocasinally some trinking water because water trickles away easily into the volcanic soil.

Drinking the water of the hot springs is not recommended because it can upset your stomach. Better take fresh water from the river or a cold spring nearby.

When climbing the Descabezado Grande take plenty of water from the base camp in particular if you plan to spend one night higher up. You may refill your supplies with snow near the summit.

The electronic map Topo Chile Deluxe from Garmin shows the contours precisely but some lakes and smaller river are incorrect displayed. Only few trail sections are integrated. Some of the “Alleys” of this electronic map are far off the true position or inexistent. You should use the Greater Patagonian Trail data files for navigation.

The paper trekking map “Condor Circuit” with a scale of 1:50’000 shows the trail from Parque Ingles to the Base Camp Descabezado Grande. This map is a useful supplement to the electronic map in particular if you need to abort the trip. In this case this map can guide on the shortest possible trail out of this isolated volcanic area i.e. to Vilces Alto.

The isolation and the high passes make this a rather difficult but rewarding trail. Good orientational skill are required because hardly any signposts are placed and some parts of the trail are cross country.

The trail starts in the tiny village Radal near the cascade "Siete Tazas". During the main season in January and February several buses go from Molina and Curico to Radal and some even go all the way to Parque Ingles. Outside of the main season there is only one daily bus from Molina to Radal leaving in the afternoon from the rural bus station in Molina.

This trail section finished at the Route 115 to Talca.

All spring and summer run four buses per day on the route 115 between La Mina and Talca. La Mina is about 4 km up the road from the hydropower station Cipreses. In La Mina is the Chilean border control post and a thermal spring. Simply wait at the main road at one of the unmarked bus stops for the bus to Talca and call the attention of the bus driver when he approaches (GPT01-WP043 or GPT01-WP045). You may also try to hitchhike.

From where to return best depends if you want to connect with the next section of the Greater Patagonian Trail without leaving any gap. If you insist on hiking every step of the trail you should take the bus stop at the El Melado junction (GPT01-WP043). At this junction starts the section 2 of this long distance trail.

If you don’t mind to skip the less atractive 10 km streach along the Maule River then you can go straight to the Route 115 and take the closest bus stop (GPT01-WP045). You may also try to get a lift with one of the hydropower station workers from main gate to Talca or to San Clemente (GPT01-W044). From San Clemente leave frequent minibuses to Talca.

Stage A: Start to El Bolson

If you leave in the morning in Radal you can reach in one day the camp and refuge El Bolson. Parque Ingles is a good place for a lunch break.

Going from the Laguna Mondaca to the Termas de Azufre makes a short relexing day and gives you pleanty of time to enjoy Laguna Mondaca in the morning before leaving and the hot springs in afternoon and evening when arriving. If the sulfor smell at the hot spring bothers you, than you can camp on one of the meadows a bit further up.

The rather long day hike from the hot springs to the base camp Descabezado Grande requires reasonable good weather as you cross a 2700 m pass.

The climb can be done in one day or split up in two. The disavantage of doing it in two days is the leak of a reliable water supply further up towards the summit once the snow is gone. If you do the climb in one day you may desire a rest day either before or after the climb. An extra day gives you also a buffer if the weather is not optimal for an ascent.

This stage can be hiked in one day. Alternatively you may partition this stage in two if you want to explore the hidden lakes after the Laguna Caracol or if you simply need a more relaxing day after you got up to the summit of the Descabezado Grande. There is a suitable camp site about 2 km after the Laguna Caracol in a wide open treeless valley. The pass between this camp site and the Laguna Hornitos should not be done in poor weather.

From the Laguna Hornitos you can walk in one short day to the hydropower station Cipreses and the first bus stop on the Route 115. To the regular finish at the second bus stop on the Route 115 it’s a rather long day. If you do not want to arrive in Talca late in the evening you may opt to camp near the finish on the banks of the river Maule and take the a bus in morning.