You can easily take any of the numerous buses to go to the Portillo Hotel: Ahumada, El Rapido, Cata, Tac, Tur Bus, and Andesmar, to name a few. Most of these leave from Los Héroes subway terminal and charge around $12.000 CLP up to Mendoza (How much to Portillo?).

Height profile of this route 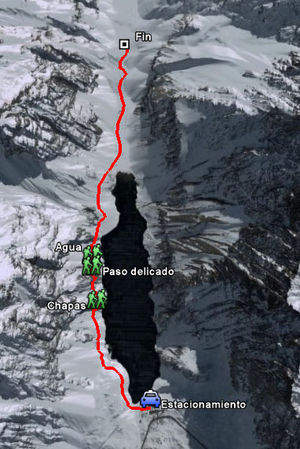 Map of the Route 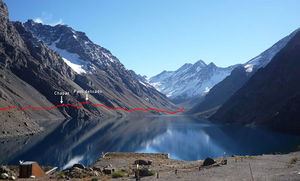 General View of the trek. Looking North, May of 2009. Photo: Nicolás Méndez
The route begins at the Hotel. You should start by walking west on a dirt road for cars. At the base of the lifts begins a path that goes north. The first stretch is a brief ascent that allows you to mount a hill that falls abruptly over the lagoon, to then rapidly descend. It follows a long traverse to a rocky area equipped with climbing bolts. Here, the view at the lagoon is spectacular. Then comes another stretch before facing a second rocky ridge. This is the most exposed pass of the trek (shown as "delicate pass" on the photo and profile), and is the sole reason why this trek has been classified as being medium difficulty rather than easy. 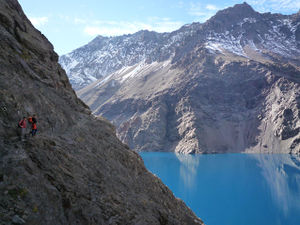 Detail of the climbing bolt zone (locked in a white circle of paint) and the wonderful lagoon below. May of 2009. Imagen: Nicolás Méndez
After a brief descent through the rocky zone, the path gets lots through kind of slope. If there is no ice or snow, this slope allows for walking with no difficulty. After this crossing of some 40 meters, you will get to a small gorge. You have to remount the gorge a few meters to get the path back, which will be visible a little higher. The exit to the small gorge is also somewhat delicate, having to step confidently through the terrain with the heels to avoid sliding down the slope. You will then return to a dirt zone with tiny bushes. Not long after the pass, you will cross a tiny stream. Then, in an open area, the path gets somewhat lost, but it is easy to get it back. You cross a second stream (with more water but also murkier) and then you begin to descend to a sandy area located north of the lagoon, leaving the former behind. Once you are at the plane north of the lagoon, you will again lose the path, but you only need to keep west of the stream (which could be dry, depending on the season). You then ascend a few meters, up to a plane where you will have an excellent view of the mountains Tres Hermanos (Three Brothers; 4751 meters), the king of the valley, that rises with its three peaks to the Northeast. 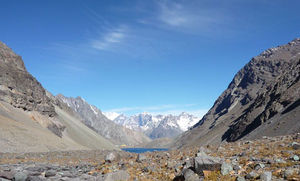 At a normal pace, this trek should take about 2 hours and a half going and about the same to return.