The right time for trekking is between the months of October, when they open the vehicular road to the Termas de Colina, and May, when closed by the first snowfall. If you want to do in winter, 'walk from Lo Valdes, consider two to three days of walking. 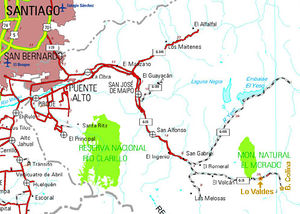 Map of Baños Colina. The start of the trek is marked with a red star (bottom right). Map. File: Department of Roads

From the intersection at las Vizcachas (Avenida Camilo Enríquez and Avenida Eyzaguirre, km 0), take the road G-25 towards Cajón del Maipo, and follow it until km 65.1 (asphalt ends in the km 66.3 just before Lo Valdés) where there is a bifurcation. To the left, it leads to Baños Morales along a dirt road, located on the other side of the El Volcán river. Between June and September this road might be closed if there have been recent snowstorms. You can check the road status with Carabineros at San Gabriel (+56228611008 y +56228612290) although their answers tend to be on the conservative side. This is the last place where supplies. It must continue along the main road and not diverted to Baños Morales, after 1.5 kilometers from the bifurcation is passed through the mining town of San Gabriel. 6 kilometers below the bifurcation to Baños Morales, once thecostsof the Afflicted, you reach a bridge crossing the River Hill. 5.5 kilometers later, by a gravel road in regular state, you get the Termas de Colina 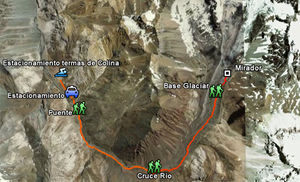 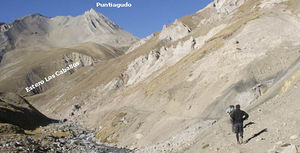 Hill River Valley, shortly after crossing the bridge. Looking to the southeast, May 2009
From the parking lot located 660 meters east of Bath Hill, at 2450m, you must follow the trail that takes you to Pointed, along the north bank of River Hill. After 15 to 20 minutes from the Baths will reach a bridge to cross the River Hill to its south shore. 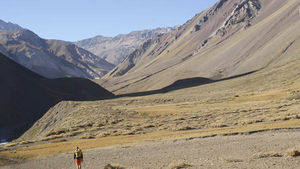 Valley Hill River estuary past the Horses. Facing east, May 2009
then be followed by the south bank of the river in an area where the valley is narrow, until he ran into the creek that leads to the inlet of Horses (½ h here). Once across the creek, you come to a plain, often populated by animals. At this point it is at the base of the Pointed. You can see a way of mining exploration in its slope. We must continue east on a plain populated bush. The trail (which is possible to lose in the plain area that follows the creek) is very close to falling into the river precipice. The path is almost clear, but after a while goes back down to a meadow where you can get lost briefly, but reviving it is a matter of instinct. After you cross the Río Azufre (the author of this review, in addition to the waypoint, built a stone pillar at the junction). The crossing should not represent a major complication, but certainly require remove your shoes and your feet freeze. Then, the path a bit lost when the valley begins to turn northeast. On a hillside where a large stone road begins again clear, with good eyesight can see it from afar. Follow the path, but now heading north. Some time ago that San Jose is visible in the background, with black snow glacier. On the right is visible the line of hills that make up the Yellow, Pan and Manu Tara. After a while, he leaves a beautiful flat valley with a creek in the middle. 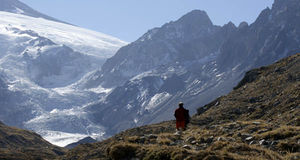 Approaching the glacier. Looking north, May 2009

This is an ideal place for camping. A little further north, the trail starts to rise due east, toward the border crossing Nieves Negras. At this point, it is possible to approach the glacier, but without a path to follow. It is strongly recommended to continue until the base of the glacier and then go about thirty minutes walking on the dirtier side of the glacier towards the summit of a pyramid of dark rock promontory. The view from here is simply wonderful, being in the middle of the glacier and without hindrance to cut off the view. It is 3220 meters, so they are vertical 2500 meters of ice which are headed. A special trip 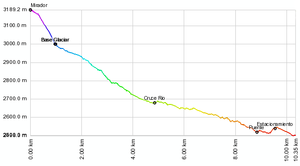 Profile of the route (from right to left)