Short Review of the Reserve

It has an area of 417 hectares and is located in the range of pre Linares. Accessed by a road from the city of Linares, dirt and gravel that reaches Melado Channel tunnel, past the reservoir area and Robleria Ancoa, with a distance of approximately 55 kms. In the flora of southern belloto highlights, endangered species and is not in any other wild area protected by the state. It is also the Maulino oak, oak, coigüe, mountain cypress, peumo, liter, quillay and hazel. The bird fauna are the most abundant, being the black woodpecker, piti, tricahue parrot, eagle, widow, fio trust, tasting, and Chercos Tiuque. The administration is at the entrance to the area. It has picnic and camping equipment. (Link: http://www.turismochile.com/guia/linares/articulos/603)

It can be done throughout the year, but ideally in the autumn, taking the beauty of the red forest. In midwinter, could be that the passage is full of snow after snowfall.

Map. Take the southern road!
Access is Linares. You must be very careful because Turistel shows two roads. We must take the southern route. Although Turistel and the letter of Roads are two routes of the same features, the road that goes by The Rabones, not pretty, and apparently it is shorter, is in state bad to very bad. It is VERY advisable to take the parallel route that goes south, the L-429, to Robleria. It's a neat and busy road. Linares is 42 kilometers from this far. From Robleria and until a few kilometers after the dam, the road is very good product for the construction of the dam Ancoa. The last three miles to the reserve, beyond the limits of the work in the reservoir, are in a state fair to poor

Buses depart from Linares to Robleria. Then should hitch a ride or "finger" to the beginning of the path for Chile. There may be some traffic due to the existence of the Hotel Melado and hamlets in the area, but traffic to the reserve is rather small.

Tour map
The route starts after a hotel and after passing through the administration CONAF. A sign of the Path to Chile to the beginning of the road, which indicates the entire route. From this point you should start walking in the opposite direction Ancoa river of great size. It takes about an hour's ascent through oak forests to reach the shed 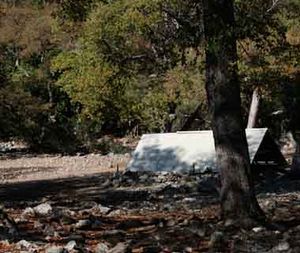 Shed (Refuge). File: Constance Miranda
, which we call "Shelter". The imprint is clear, with enough loose material product of the frequent passage of livestock. All the way will go see monoliths and small "altars" with Saints (San Sebastian and the Virgin) to leave offerings to the mule drivers. Shortly after one of these altars in a bend in the road, the trail enters an area with almost no vegetation, soon after which is the viewpoint of the Sendero de Chile. Farther up the road gently ascends a plateau populated by large oak trees scattered. At the end of this plateau is the way 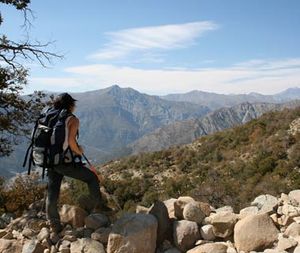 Paso. File: Joaquin Barañao
, where there is another altar with the figure of Saint Sebastian. After passage, it's all down to the river Melado. The river and the upper end of reservoir Meld begin to see the twenty minute descent. After a zig zag on a flatter section, a new altar erected on top of a rock. Then the route crosses over a large water conveyance canal, which may or may not carry water as the season (although lead is very difficult if not impossible, to fill bottles without the aid of ropes). After this channel, the trail merges with an old vehicle cumin, which continues for about 15 minutes, to a point at which the vehicle road bends to the right (southeast) but the path follows the river right Melado , toward the river directly. 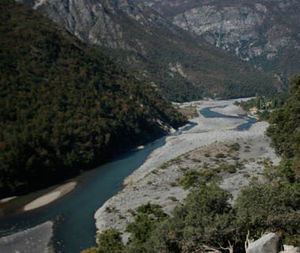 Melado a little below. Almost there. File: Constance Miranda
Then comes a new zigzag until it reaches the river bank. Going up a few yards along the shore leads to a good place for camping in the shade of the trees, but unfortunately because of his dirty frequent users. It is recommended lowering the bed of the river and camping on the sand. The descent takes about two hours to three hours. The walk to the police station is 1.2 kilometers upstream additional

Altitudinal profile of the route

At a normal pace, this trek should take about 5 hours between the start of the trail sign for Chile and river. Ideally, do it in two days, staying in the river, but it is perfectly possible to do this round trip in a single day pretty hard. It is possible to reach a lagoon, but that would take a third day on the road.

It is recommended, if you are going by car, take the road further south from Santiago coming. Is a path that is arranged by Besalgo (who built the dam). The road running from the north is not in good condition, unless it has a 4x4 vehicle is not recommended to go that route. It is essential to carry water from the shelter sector, step up to the River. In dry seasons there is little chance of finding estuaries or watersheds.