Between October and April

By Car and Road Status

From Talca you must take the rout 115 towards San Clemente (East), a small town. There are 40 kilometres from Talca to the Vilches road to the left, the road is in good for most of the cars, half of it is covered by asphalt. From the start of the Vilches Road, there are 29 kilometres more, the first 9 with asphalt.

There are buses to Vilches from Talca Bus station. Frequency of this busses if nearly 2 busses per day during winter, and one almost one every hour during summer. Remember always ask for more information calling to the buss terminal station +56 - 71 - 235327. 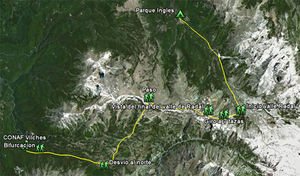 APROXIMATE map of the route. It is important that somebody add waypoints between the river cross and the pass, because it is not easy
. 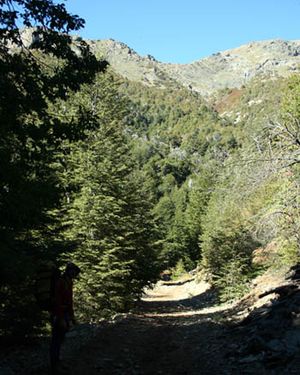 Initial Trail. National Park Altos de Lircay. May 1st 2008
From the office in the intrance of the National Park Altos de Lircay, CONAF, from Vilches there is to continue through a car road around 1.3 kilometres where a bifurcation appears. There is to take right. This is the furthest poiint that you can reach by car. From here on there is to walk around 6.5 kilometres down the hills that close the valley of the Lircay River by the south, passing for the shortcut to the right to Laguna del Alto (english) and by a resting point, to a camping place to the side of a small rier. This point is where there is to leave the main trail that leads to Enladrillado and turn north

Just turned North. 05/08
. From now on and till reaching the pass, the trail will be lost several times, so it's really valuable to have with you a GPS or a good map. First, there are around 700 metres of walking over the wide valley till crossing a really marked trail east-west that leads to Valle del Venado (It's also the trail that Schubert & Sieber describes in Adventure Handbook Central Chile for this trekking). Then there is to walk around 450 metres north-noreast till the base of the hill that counts with a clearly trail that passes to the west of a notorious promontory. Following east, you arrive to a beatiful plain higher than the one before. You must continue north, passing a small elevation and then fallin a plane sector lower than the one before. All thiz zone, since the Enladrillado trail was left, has disperse vegetation and small trees. Once you find the ladder that close the Lircay Valley from the north, you must ascend towards the pass. There is not to take a marked trail that goes towards the east direction, because this one leads to the Venado River. Starts then a soft ascending but constant. When you find the 1900 metres, vegetation disappears and the trails goes along an edge towards north with some rocks through it. The pass is about 2020 metres approx.

North sight to the pass, from south to north. 05/08
Once you have reached the pass, the trail goes straight noreast. This route is very non-intuitive, it goes away from Siete Tazas and continues east towards the edge. The walking now is wonderful, through the edge that separates the Licay Valley and Radal, with the Descabezado Volcanoe always in front. 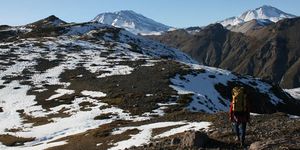 Edge, sight east. Descabezado to the left and Cerro Azul to the right. 05/08
. There are around 6 kilometres of walking from the pass to the point that starts the descending towards the Radal Valley. Sight to this valley is really imponent in this point. 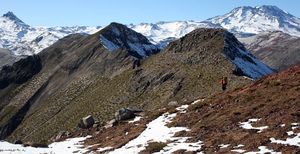 A bit before the descending towards the Radal valley. 05/08
The descending es really abrupt, in a pronounce zig zag through bushes and medium mountain. When you reach the valley again, oak forest come back (nothofagus obliqua) and you arrive through a beautiful place for camping. From now on, there are two ways to reach Parque Inglés: follow the clear trail that goes through the east shore or going towards north through the valley so you find the trail that goes through the north shore of the river (but farther from the river). The reason why to choose the second option (harder) is that in case of taking the south shore trail, when arriving to Parke Inglés we will be in private terrains (even the end of the trail is through a car road that leads to the fish-Growing-place) and the landlords had had many problems with the hikers that have appeared from here. There are around 9 kilometres of walking from the described forest as a good place to the Parque Inglés camping, this walking is through a populated bush valley.

Normally you would do it in 2 days. Considering half of the trekking is through the pass zone, either you camp (hard) near it, or you can distribute the asimetrically the effort between the 2 days, camping before it (with a really hard second day) or after (with a very hard first day). However, considering the distance and the difficulty of the ascending of the initial point and the end, you must consider a lot of time for the logistic matter asociated with transport.