From the town of El Chalten is to take the route north to Laguna del Desierto to km. 7, place where the River Electric. Here begins the walk and is clearly marked with a sign that says "Piedra del Fraile 2 hs. The vehicle is a gravel road and is in good condition.

There is no regular public transport from Chalten to your starting place for this trek. However, it is easy to negotiate in a village taxi service for a transfer to a small group. The gravel road is in good 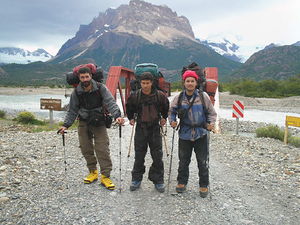 The trek begins where the sign "Piedra del Fraile 2 hs.", 460 meters. Here begins a very clear path to be interned by the River Valley Electric to the west. It goes in through an open forest of beech, for 2 hours after arriving at Piedra del Fraile (530 meters). Here there is shelter and camping area amid beautiful surroundings.

Continuing west the forest disappears to give way to bare ground covered with rocks. The trail continues to be very clear from the south bank of River Electric. After 1 hour Pollone cross the river, a tributary of the River Electric, which can be crossed on stepping stones if the flow is low, or wetting up under the knees if the flow is increased. In this place has a spectacular view of the north face of Fitz Roy and the needle Pollone. After crossing this small river, half an hour further down the path to the west end of Lake Electric, where there is a camping site protected from large rocks called La Playita (565 meters). For the first day of camp there is an alternative both Piedra del Fraile and La Playita. 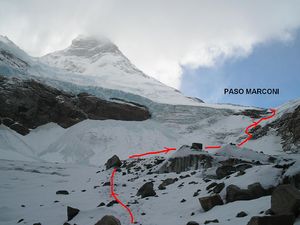 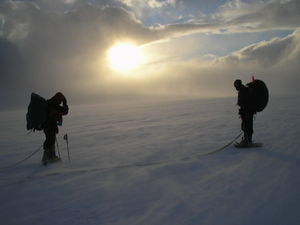 The second day was admitted to Southern Ice Field to the refuge Eduardo Garcia Soto (1587 m), better known as the refuge of White Cap, climbing thousand meters. From La Playita to the refuge is 6 hours. Consider additional 1 ½ hours if one starts from Piedra del Fraile. The trail is clear 1 hour from La Playita to the Marconi glacier. Once on the glacier advance is necessary and tying shoe or randonee depending on the time you are. It must continue to the northwest to step Marconi, gateway to the Southern Ice Field. The ascent is gradual and must navigate some cracks. Once in the passage the view is amazing. To the southeast you can see the vertical walls of the hills and Pollone Piergiorgio. To the west lies the endless plain of South Icefield and several strands present in the plateau and that of Pius XI and The Pyramids. In addition to the step is entered Parque Nacional Bernardo O'Higgins in Chile. We must continue north 2 km. to the refuge, which is ice on bare ground. 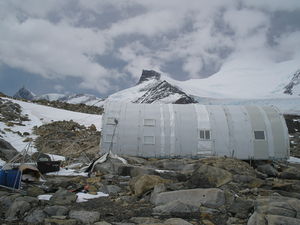 To enter the shelter Eduardo Garcia Soto is lifted from its base table from below. The shelter is large and the interior are mattresses, and occasionally, bits of food and gas left by other expeditions, but should not be considered as a fact that this is going to be.

The third and fourth days are for walking on the Southern Ice Field to leave it in the headwaters of Glacier Viedma. This is a total walk of 25 km. on ice in the north-> south, with a good rhythm which can be done in one day. It starts transiting with lace curtain Marconi east. Advanced 13 km. leads to the fabulous place that gives this circuit, the Circus of the Altars. Here, amphitheater, are the unknown faces of granite hills west of Torre Egger, Standhardt, Bifida, Four Fingers, Domo Blanco, Rincon and Fitz Roy, among others. In this place you can camp building a wall of snow blocks protecting the tent from the wind (1345 m). 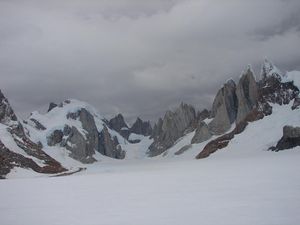 The fourth day is still heading south. To the west is the imposing Mariano Moreno range. Eastward us with a cord Adela start to appear after the hill Murallón of Viedma. As it progresses and is losing altitude are appearing more and more cracks: the Viedma glacier begins to hatch. On the last flight on the ice must navigate dozens of cracks, which make progress slow and zigzagging. When the lateral moraines are now achievable, exit the glacier to the east. Here are several possible places to camp, including the lakes on skis (1090 m.) or Ferrari.

The fifth day he ascends to the Windward Passage and down the other side of it and continues down the valley of the tunnel. From the place where you camped the day before, it must ascend eastward to the above step (1428 m). From here the trail continues and reappears clear signage of the Parque Nacional Los Glaciares, Argentina. It descends in a zig zag north facing glacier Superior River Tunnel, also called de Quervain. After 1 hour the trail meets the Rio Túnel Inferior glacier. This glacier is a 1 hour walk across its sector lower, and tying is not necessary since it is tight without the presence of cracks. Once across the glacier the trail descends back zigzag to a point where there is a metal with a zip line pulley across the river tunnel. After crossing the Tyrolean, very little progress is being made to meet the gap Toro (667 m), nice place to camp. 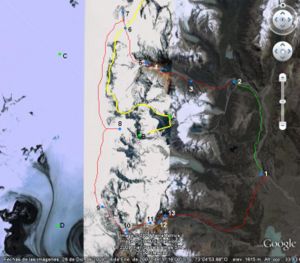 Representation of the voyage and Information. Base File: Google Earth

The sixth and final day trail passes through a clear and marked. Progress towards the east Siguendo the river tunnel. At one point, the trail moves away from the river and turns toward the northeast. The trail ascends through a steppe landscape. At some point, the Lenga forest reappears. The trail proceeds smoothly and is losing altitude. The traditional eastern faces Torre, Fitz Roy, Mermoz, Guillaumet, among others, may be visible in certain light. The trail ends at the village of El Chalten, where access south on Provincial Route No. 23.

Circus of the Altars, in optimum weather conditions, it takes between 5 and 6 days, as described. However, it is very unlikely to find a good weather window of this duration, so in practice should be considered about 10 days to complete the circuit, keeping in mind that there will be days that you can not move forward. Also keep in mind that the possibility of not doing business there if the weather looks very bad for many days in a row, something that happens quite often on the ice.

Being a trek that passes by both Argentina and Chile, you must give notice in Argentina gendarmerie stationed in El Chalten, who in turn give notice to the Carabineros present in the village of Candelario Mancilla.

The River Valley Electric is for private land, who charge XX pesos per person per day to camp at Piedra del Fraile. In case of not wanting to camp in this place and continue to La Playita, you must cancel a smaller sum YY coinciding with Argentine pesos.

No admission is charged to pass through the Parque Nacional Los Glaciares National Park and Bernardo O'Higgins.

Circus of the Altars is a trekking around the massif of Mount Fitz Roy, and much of the route passes over the Southern Ice Field. It is precisely the transit over the body of ice and inhospitable climate which makes it a high difficulty trekking. If you want to do this trip on their own, it is essential to have knowledge of general mountaineering techniques, such as crevasse rescue, building igloos and caves, among others. Otherwise, an alternative is to take some of the agencies in El Chalten to do this tour with experienced guides.

It is recommended not to do this trek alone, an optimum of 3 people roped and roped travel throughout the section of ice. The climate on the Southern Ice Field may change suddenly from one stable state to one of storms and wind gusts of white. The land itself is not difficult. The greatest difficulty, as mentioned, is the changing present time on the ice, for which it should be well prepared.

In El Chalten and El Calafate is easily achieved by the South Patagonian Icefield topographic map, Trekking-Mountaineering 1:50000. The use of GPS and a good cover letter is essential for this circuit.