Why choosing this trek?

One of the best treks in Chile, passing through places with beautiful views of the mountain with its glaciers, which dominates the northern sector of the General Carrera. High probability of spotting huemules, all surrounded by large beech forests. I think that in 4 days, we encountered no more than 8 people.

The starting point of this trek is the Carretera Austral, as it passed Castle Hill National Park, approximately 70 kilometers from Coyhaique. The exact point of departure is The Great Horquetas yet to be passed before the Laguna Chiguay CONAF Nursery (5 km further north from the starting point on the Southern Highway) to give notice of relevant information, as well as pay the Park entrance. It is important to pay the entry to the Park continues to strengthen its work such as reforestation with native forest (a theme throughout Aisen). If you're tight with the money from the safe guards will be willing to help. At least helped me.

It is best to go in late December to March, because before that is likely to encounter snow and very cold in the higher sectors of the trek.

The author of this review did this route after the large storms that struck in February 2009 Aisen. Thus, in some areas the road was affected and it took more time than budgeted.

Much of the route is marked with red paint and white = sign, with a red and one white, so attention to this. Route description == == 'Proposed itinerary'

In my case we started walking from Laguna Chiguay (which adds about an hour to walk). The starting point is very clear from the road, at one point that the road makes an inverted U very pronounced and is a deep valley to the west side of the road.

With the backpack along a path to 4 x 4 (the first day will almost always follow this path), must be avoided and a gate about 50 yards away across a creek by a bridge of sticks about 20 meters above the path. The road will pass along the left bank of the river, for about 30 minutes by spaces from which the forest has been cleared for cattle. After half an hour trek that crosses a clear path, surrounded by beech by approximately one hour. At this point we reach several small pastures with cattle and a small house to the left side of the road. At this point we have to ford a stream coming from the south (the first of about 3 or 4 and sometimes take off their shoes vadearlos as the water rises above the knee), which makes it a little slower the walk (the process of taking off one's shoes, cross the river and again put on his shoes). From this point you can see debiese and Castle Hill, with its glaciers. 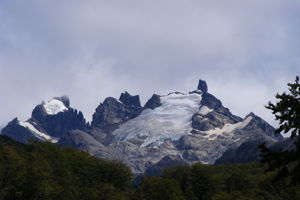 View of the Massif during the trek day 1

With the storms of February 2009, water was part of the way (is particular and there are not many efforts to repair). After an hour you must cross a new stream for this case located on the right (north) of the watercourse, for another 45 minutes after having to cross another creek more. After the road goes through a forest of beech large after an hour to see a pond on your left. From this point, after 30 or 45 minutes you reach a place of camping CONAF enabled, with a cabin for the rangers, tables, places for fire and a latrine. The place is beautiful, since one is surrounded by beech about 15 to 20 meters high. If there is more energy, you must stop here, but worth it to proceed to shorten the hike the next day.

After this camp CONAF, we must move forward on the path until you reach Rio Turbio face that is unmistakable in the amount of material brought back by the water. In the background, to the south west is unmistakable in the saddle which will have to spend the following day. Must continue to hit the river along the southern shore, until he ran into a sort of small channel to look for where to cross (when I had to wade). At this point, you see a poster debiese woodcarving indicating a campsite, but must be followed 10 minutes later to the place with tables and latrines. (To see this lineup, having forded several streams, we stopped there for the tired and cold when in fact it was better to have advanced those 10 minutes).

The walk debiese have lasted about 6 to 7 hours from Las Horquetas.

Continuing along the south side of the river, to be followed by the south side of river. The route begins to ascend through the forest of beech, growing steeper and consequently disappearing forest. Cross the river and turned into small streams and go uphill to get loose rocks after about 90 to 120 minutes to portezuelo. This portezuelo is long, is very squeezed, it is very narrow and there is usually windy so you have to bundle up well. The wind can make the rocks roll, so much attention to this. Finally arriving at the southern mouth of the portezuelo you can see the lake in the distance, but you usually focus on the glacier and mountain to the right.

From this point, the road drops sharply (ideal for pumping your sappy, as I did), so in many places no longer have to invent daring route to continue falling until the creek starts as cascades from the hanging glacier. It follows the south side of the creek into a forest of thick beech until literally the path ends, which indicates to cross the creek. It follows the north shore, almost traveling west to get a poster with the camping sign that says "Forest Camping Estero" in the midst of a large sector of dead trees, their trunks still stand as witnesses . In this sector is easy to lose the path so that attention to brands. From here the route starts to climb again. From the saddle should be 2 to 3 hours (including detention time to take photos at the Rock Glacier).

One will reach the west arm of the Estero del Bosque (coming from the lagoon) and route it back at its northern shore, arriving after about 45 minutes Camping Estero del Bosque. About 10 minutes after this place has to cross an arm of the estuary (bring lots of water, is actually a river) by a team of about 70 inches wide that can be very slippery when it rained. It is better to sit and go through the trunk between his legs to fall about 3 to 4 meters to reach the icy river. From this point the road goes up through the beech forest for about 90 minutes until they begin to finish the wood. These last remnants of the forest, there are good places to camp at the upper side of the road, with Castle Hill over one. 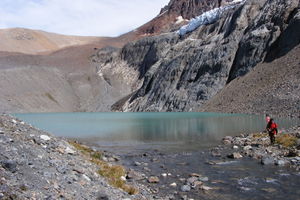 This is the best place to camp, because in the lagoon one can be very windy and cold. La Laguna is a 15 minute walk from here.

From the point of departure should be about 7 hours of walking, being the last 2 to 3 hours tougher climb and tired.

The route ascends and after about 15 minutes one above the Lagoon, where a breathtaking view of the glacier and Cerro Castillo. The route follows the south side of the lake to rise sharply for about 1 hour to reach a plateau, where one must loom to the south side. This plain is very wide the saddle between two hills, where one has a big, big panorama of the northern sector of Lake General Carrera, Villa Cerro Castillo, the southern highway, Rio Ibañez, ice fields north and the Hudson Volcano. It's worth sitting down to watch and admire the view for good minutes. 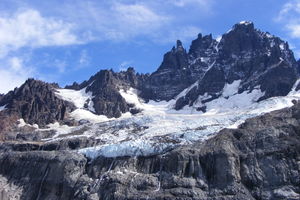 Cerro Castillo, rising from the lake

Go back and should continue to take the rise for about an hour west by northwest direction to get a new door that in this case faces the valley of the Estero Parada. Supposedly, from this point there is a trail that goes to the upper margin of the forest to arrive at Camp New Zealand. However, the storms in February 2009 erased all signs of the trail, eroding the route. That's why we had to come almost directly, very slowly, to reach a grove of leafless trees.

It turns out that the southern sector of Cerro Castillo is affected for about 2 to 3 years by a plague of Cuncuna who devour every year in summer the trees. The plague Cuncuna advances and remaining in the half, they starve. 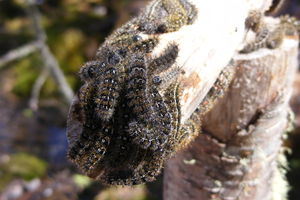 Well, once we reached the forest began to move right to the west, by any clear path until after about 45 minutes we reach the path up to the New Zealand camp. After about 2 hours by the trail we reached the camp, which has tables and a latrine. It took us more than we had budgeted for the problem of the path, so it took us about 6 hours walking.

The route is very simple, it should drop almost directly along the path through the forest without leaves (like it or not, they will tread hundreds if not thousands of Cuncuna) to reach a small camping site with tables, about 2 hours after the game. At this point, the Estero Parada is encased deep and one is on the upper side of the east bank, passing by wooden chairs placed strategically in the best views of the valley and Cerro Torre.

After an hour came to a fence, which presents the dilemma of cross or follow it. Crucenla and keep falling until they get too close to the inlet stop to get a house with large pastures for grazing (30 to 45 minutes). It crosses a creek and continuing some 300 meters in a southerly direction to reach a road vehicle which continues to the east (you have to open a gate), which in the first 800 meters are large livestock. From this point simply follow the road for about 90 to 120 minutes to reach Cerro Castillo.

In about 5 hours debiesen be coming to Villa Cerro Castillo. They deserve a good steak or sirloin, in the position to the right of way to get to the Villa, an old bus.