All year. Ideal at the end of May and beginning of June, when the oaks are bright red. 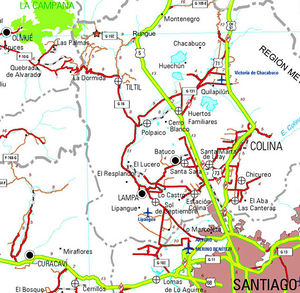 Map of access to the Oak. The starting point is marked with a star. Image: Dirección de Vialidad

From Santiago, you must take the Pan-American highway (route 5) in the north direction. The detour to Rungue is at kilometer 54. You must take that exit and enter the town. Where the street ends, we must turn left and, a few meters further on, turn right (the street ends anyway) to cross an estuary. Immediately after crossing the estuary, you should turn left, and begin to skirt the estuary along a gravel road in good condition. The Rungue reservoir will then be bordered. After 3.9 kilometers from the Pan-American highway, there is a detour to the right ("A Caleu") which must be taken. This road, also gravel in good condition, goes through the valley and ascends progressively. Approximately on the 11th kilometer from the turnoff (14.9 from the Pan-American Highway) Caleu has been reached and a fork arises: you must take the left, which continues up the hill. 970 meters above, just before the passage to the valley of Olmué, the path to the oak tree appears on the right.

From the La Paz bus terminal, located on Avenida La Paz and Dávila Baeza street, daily buses depart for Til Til, from 6 AM and every 15 minutes. At 16.00, a bus leaves for Caleu. Passage value $ 1,600. It is quite a busy road, so the possibilities of hitchhiking are rather high.

Filo Caleu - Olmué from the fork the vehicular road that leads to the summit of El Roble. Looking west, November 2009 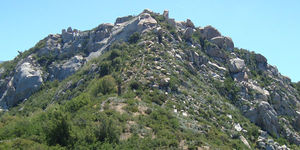 Cerro Penitentes. It should go up on the right, between the bushes. The most complicated comes right after, but it is not seen. Looking west, November 2009 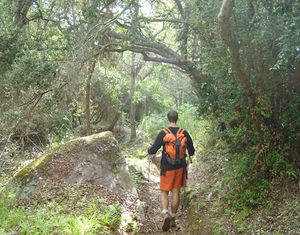 Walk through the dense forest of the Cajón Grande creek. November 2009

From the access gate to El Roble, at 1242 meters above sea level, it is recommended to continue driving 4.1 kilometers further, up to 1680 meters above sea level, on the edge that divides the Caleu and Olmué valleys. To the west, there are beautiful views of the palmar of Ocoa and La Campana. Shortly after this first view of the Olmué valley, a pedestrian fork appears for the path that leads to Ocoa (1680 masl and highest point of the route). It's the parking point. Turn left, heading west. (For the top of the Oak you must continue on the main vehicular road, through the route described in Cerro el Roble (vehicular route)). The route is wide and pleasant, in the shadow of the northernmost oaks of the Southern Hemisphere, and it enters with a gentle slope along the southern slope of the edge that separates the two valleys.

After 2.3 kilometers, the footprint is passed to the northern slope of this edge, with more sun exposure, and the vegetation will flatten suddenly, disappearing oaks, but getting in return a beautiful view of the palmar of Ocoa at our feet. One more kilometer should be traveled along this wide route until it empties into an old quartz mine (on the southern slope). (If you turn right, you will cross the route Caleu - Ocoa). It is at this point that the "wild" stretch of the route begins, along the Cordon de los Penitentes, because there is no clear path along a long stretch. You must continue along the edge, ascending through the bushes and rocks. There are some faint traces of animals, but in general there is no well-defined trail, so the slogan is "always on the edge", along an old pirca that crowns most of the route. After 15 minutes you reach a summit (marked as "summit 1") from where you can see the route ahead.

The next section is somewhat more confusing, because the edge becomes less clear. It is recommended to follow the pirca, which turns a few meters towards the south. Then we must move again towards the west, with the aim of retaking the edge, which becomes visible again. To do this, you must go down a quite hostile slope, between bushes, some of them thorny. Shortly before reaching the lowest part, a path that comes from the south, from Olmué (marked as "trail start") is reached which must be followed. The walk acquires a more friendly character again. 35 meters further on, a plain surrounded by trees is reached. Shortly after, the ascent to the rocky Penitentes hill starts, the last stumbling block of the route. The path will be clear for a long time, ascending gradually. The final stretch before the Penitentes, the footprint and the pirca disappear (after all, the Penitentes is a natural stone) and access must be sought between the bushes. The last section before the summit requires helping with the hands to climb the rocks, but it is not a serious difficulty nor does it justify the use of ropes, although the vegetation makes the ascent somewhat difficult. The summit of the Penitentes is a beautiful viewpoint of the route that we have been following, as well as of the two valleys that the cord separates. The section immediately following is the most complicated part of the route, since one should look for a passage between the dense thorny vegetation of the northern slope (the southern slope is a small precipice) and the large rocks. But finding the way is possible, and then there is a tenuous path that continues with some clarity along the arista same until the Ocoa Pass, the lowest point of the edge, and point at which this route connects with the Travesía del Parque Nacional La Campana.

Here there are three options: you can choose to go down to the south, and go by Granizo or Cajón Grande (as described in this review) which takes about 1h 45 ', or you can go down to the north, towards Ocoa, which takes about 2h 30 ', and for which you should read the respective section in Travesía Parque Nacional La Campana. If it is low towards the south (by either of the two routes) you can go through a leafy forest of languages, peumos, liters and quillayes and there is an Olmué, closer to Santiago and with buses every hour to Santiago. If it is low towards the north, you can go through a singular Palmar, and you have found a CONAF, where there is no mobilization, and then an Ocoa and the Pan-American Highway (with many buses but that do not necessarily stop on the way). Descent to the south '

Between six and seven hours from the parking described. The reference of the first author is 4h 30 'until the end of the edge (Paso Ocoa) and 1h 45' from this point to CONAF of Cajón Grande or Olmué. Add 30 to 40 minutes if you start walking from the oak entrance control in Caleu.