Panoramic from the summit of Cerro El Mauco to the Cordillera de Los Andes. September 23, 2017 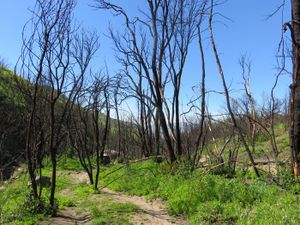 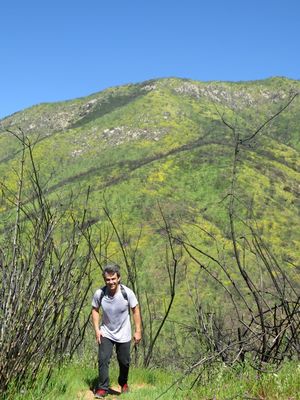 Shortly after the 2nd crossing of the stream, 9/17 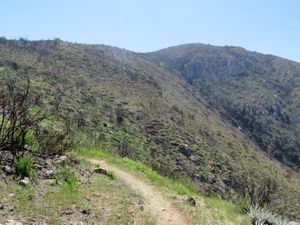 Overview of the ascent from the middle of the road. Looking North, 9/17 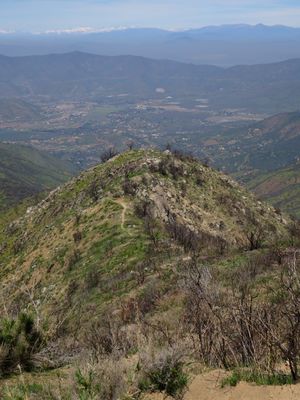 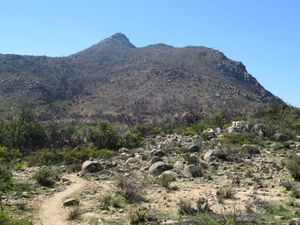 From the plateau. Looking North, 9/17 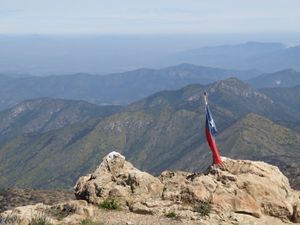 Good viewpoint of the Andes mountain range and the Pacific Ocean at the same time. However, the raging fire of the summer of 2017 has made the landscape an arid and sad affair.

Winter or early spring. Otherwise, it is arid and hot. Ideal immediately after a snowfall in the Cordillera de Los Andes.

From Santiago, go along Route 68 in the direction of Valparaíso and Viña del Mar. Go past the town of Curacaví to enter it. At the first exit to the caletera located after Curacaví, almost immediately after the bridge, leave route 68. Just 330 meters ahead, turn right, following a sign that says "Camino El Toro". Put the mileage to zero at this point. Proceed along this road in the North direction, and at kilometer 5.3, where there is a large barn of a dairy, turn left.

It will continue by gravel road. 1.3 kilometers later you must turn right. From then on, just follow the gravel road in regular state to the hotel barrier (km 8.83), normally closed. Park at this point.

There is no public transport. 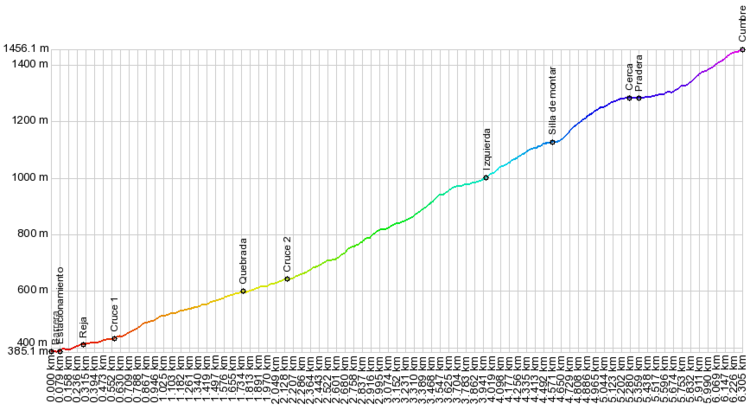 Route of ascent to Cerro El Mauco. The altitude of the summit is underestimated by about 30 meters

From the hotel access barrier (km 0 - 384m) there are 80 meters of walk to the hotel parking lot. In the same parking lot, there is a sign indicating "courts", going up some stairs, to the right according to the direction of travel. After climbing the stairs, you come to a wide path. Turn left, and shortly you will pass next to two tennis courts abandoned and invaded with grass. You pass through a dense vegetation area, until you reach a small estuary (km 0.6 - 440m), which at the end of summer could be dry. Attention here, because the temptation is to advance through the stream bed, but no. You must cross and find the path that exists on the opposite bank.

The path climbs a few meters up the slope and continues parallel to the estuary, in a Northwest direction. In short, you will reach the burned forest. It is a sad landscape: hectares and hectares of black trunks, of what used to be a forest of peumos, boldos, quillayes and litres. At the date of this visit (September 2017) shoots were observed at the foot of some trunks, but recovery will take time.

It will continue by gravel road. 1.3 kilometers later you must turn right. From then on, just follow the gravel road in regular state to the hotel barrier (km 8.83), normally closed. Park at this point.

There is no public transport. The path is quite clear. At km 2.1 (646m) you get off to cross the estuary for the second time. At this point begins the steepest ascent to Cerro El Mauco. After twenty minutes, the footprint goes through a sector of dense vegetation, less affected by the fire, in the Northeast direction. At 820, the track gives an elbow, and the course is changed to the Northwest. From here you can already see the Curacaví valley and the first glimpses of the Andes mountain range.

After an important climb, you will go through a traverse almost flat, after which you start the ascent by the edge. You will pass by a small saddle, and just after, at km 4.0 there will be a fork in paths. Take the left (marked with a snupie). Follow the edge and you will reach a second small saddle.

The edge is transformed into a slope of little slope, which ends in a strikingly flat plateau (km 5.3 - 1285m). You will pass a fence and then you will reach a meadow with a handful of large trees, good place to rest. After this meadow, the situation is somewhat confused, because the path becomes blurred. You should continue straight to the North, do not turn to the right as suggested by the trees and some animal tracks.

From here to the summit, the footprint is lost frequently, but it is not a major problem, as the summit is very clearly visible, and the fire cleared the terrain of plant obstacles. The somital cone, of quite slope, faces by the Southwest, or by the left as it is seen from the meadow. There is no difficulty or any stretch exposed, as someone might fear from a distance.

At the summit there is a Chilean flag. There is a good view of the Andes and the Casablanca Valley.

To contemplate three to four hours of ascent, and something less than two hours of descent.