All year, but preferably avoid the driest months (January to March), when an earth?, And to privilege the winter when the hills are green and can be the beauty of the Plomo massif and La Paloma snow. The days immediately following the winter rains, when there is some snow along the edge, are the best.

It should go up Avenida Las Condes where it ends up in Plaza San Enrique. Once there, you must turn right by Pastor Fernandez. Continue around, cross the Mapocho and, after riding the bull, you get to a street that comes to the left and a sign that says "The Nature Sanctuary. The natural thing is to park there and continue on foot or hitch-hiking (easy one weekend) to avoid the car back up trekking around. The next street, also on the left is the narrow Camino Alto, where it must continue. You must walk this road to where it ends (where there is a junction, Camino High is coming up, to the right, the left is Las Acacias), which is where the parking lot and the astronomical observatory Pochoco the same name.

Only reachable by microbus to Plaza San Enrique. From here you can take a bus to the parking lot of Pochoco for about $ 1,300 (Accurate!) One weekend, you can walk through Pastor Fernandez and hitchhike. If you are going to "face trekking" is unlikely to achieve a ride, especially from the High Road when it is obvious that the destination is the Pochoco (a weekday is much more unlikely). 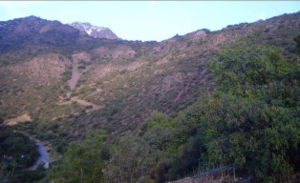 For the first installment can be read, with somewhat more detail, the path Pochoco ]].

Filo leads to the Plains of Javier, from Pochocón. Looking eastward, October 2009

The route starts in the parking lot described. From this point you should start crossing a wooden fence that is located to the northeast. From this point you will notice that not a single path, but actually a small network of intertwined forking paths and then reassembled, so there is no need to stop at each branch to assess the corercta alternative: they all come to the summit. The route is clearly marked in three sections separated by two breaks. The first tranche, part going up the hill, bordering the observatory Pochoco, heading southeast. After 5 to 10 minutes you cross a wooden portal is always open. Then the route turns to the east and up the northern slope of Pochoco. It is an area of sparse vegetation and wide, dusty trail, which in summer can be quite slippery. After reaching some trees, rocks, and meanders a bit (in this area may miss some path) before reaching the edge. We are in the western ridge of Pochoco appeared Mapocho River valley to the south and have achieved the first break. The second part is more friendly, then ascends along the ridge eastward. The route alternates between small sections on the northern slope (dry) and south (forest, inhabited by quillayes). While it is on the edge, there's nothing like getting lost, though the route may seem confusing sections. They pass several large boulders. After reaching a kind of false summit and down a few meters alcanzael second break. This place is topographically a "saddle" with the ground rising to the summit and from where we came from, but down to our right and left. A good place to relax and watch the final rocky stretch to the summit. The route follows the ridge a few yards until it disappears and facing the final rock mass. It must overcome a small gutter rock that requires using hands to assert (it is very easy, nobody panic). Then the trail continues to turn south. The last part zigzags between the rocks and cactus (there are several branches irrelevant) before reaching the summit. Here ends the route described in the route Pochoco 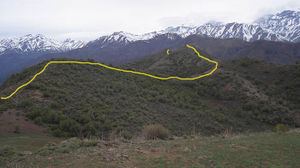 From the summit of Pochoco, continue along the ridge toward the southeast, which soon acquires an easterly direction. A few minutes will reveal a launch point for hang-gliders to the right, but should be followed by the edge. It's a beautiful walk, with valley of the Array to the left and right Mapocho (including an excellent view of the greater part of the path of The Hermitage San Carlos de Apoquindo and the Route of the Condor further east). After Pochoco 20 minutes from the summit is reached Pochocón (in Pochoco is not really more than a buttress, at only 20 meters prominence) where there is a stone pillar. You must back down, and climbed the last hill of the day, reaching the Loma de la Vaca, where a concrete pillar. It is a good place to rest, much more prominent than the Pochoco and therefore better view to Los Andes (although its summit can be avoided by following the path that surrounds the north). Then the route turns northeast. The hike is still very smooth and scenic, with cliffs to our left and the massif of lead (which can be spectacular after a snowfall) on the right. After a couple of other minor peaks, and half an hour from the Loma de la Vaca, is the great plain that is Javier Llanos, with the distinctive stone corral in the middle. During winter and spring, appear as a large pasture, but in summer and fall will be just dirt. It should go down the ridge to which this route has been marked as a "shortcut", a barely visible path that is separated from the main trail and that travesea along the slope, avoiding up a new summit to back down. The route runs with little clarity to the top of the plateau. It should then come down and go to the corral, made by an ancient rectangular stone wall crumbling, to 1840 meters. No water, but a good place to rest. Then they must begin the turn toward the west. The yard is like a corner on the route, which changes the forward direction. 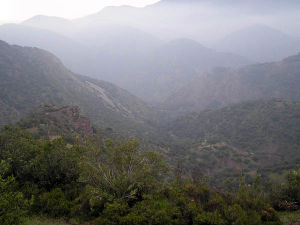 Descent from Javier Llanos. Looking to the northwest. October 2009

Then, continue along the canal that flows around the plain, which soon becomes a path to walk quite clear. Once it has outpaced Javier Llano, began a sharp decline will continue until the Shrine. The path is always clear, first along one edge, then parallel a small stream that joins the estuary Arrayán few feet higher than the camping area of the Nature Sanctuary. To 1185 m, and a less steep area near the stream, you must cross the small stream of water and cross a fence. Then it follows terrain with little slope until it reaches a final leg of the ridge, passing the foundations of an old tower (apparently from an old broadcast tower for the mine's bronzes). The barbecue area (and music if you are a weekend) are already notorious to the left. However, it is preferable to follow the ridge to some houses where there are many goats. You must pass along to them and then (Strangely) down to the bed of the estuary, away from the barbecue area. Then they should continue along the creek, and then surround the estuary along the southern shore Arrayán, to reach the area of roasts. From this point, should not be difficult to get a ride to where it was suggested to leave the car, or to Avenida Las Condes if it was public transport.

From the summit of Pochoco, you may continue to Llanos de Javier, a trek of about 6 hours total.

Map and waypoints in Google Earth