Can be done all year round but it's at it best in the winter months when there is snow or September and October, when the slopes are green and the waterfall is at it's fullest.

By Car or Bike

Drive to the end of Avenue Las Condes to Plaza San Enrique. Here take a right on Camino Pastor Fernandez and then a sharp left where a sign points to the sanctuary.

There's a collective that runs from the Plaza to the beginning of the dirt road that leads into the park. From there it's a short walk to the park walk. Apparently this costs about $1300, alternatively due to the lack of a bus service hitch hiking on the road is very common. 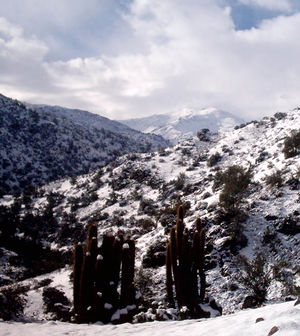 the valley in snow. May 2004. File: Marcos Allende

From the entrance of the Nature Sanctuary, continue driving along the road for 1.05 miles until you reach a fork. Turning to the right there is a car park. Cross the river and head up a path bearing left past the barbecues. Keeping the main river on your left the path rises and then falls to cross a stream. Following the path beyond this you will reach a small hut and swimming pool Cal Spas, which have tepid 20 º C water all year round which can rise to between 30 º C and 42 º C in the hot summer months. Depending on the season, it might be necessary to remove your shoes to cross the creek. From that point, the path is very clear to the end, always on the right side of the river. The trail weaves it's way through the valley with Nevado de Los Angeles (3623 m) acting as an impressive backdrop.

After about 15 minutes you must pass through a gate in the fence, and another gate half hour after crossing a small stream that carries water only in winter and early spring. Shortly after this you reach an area of large pine trees, where there is a stone corral. Past the area of pines, there are two large circular corrals on the valley floor and a third gate. Then the trail crosses a second stream, with more water than the first where it is a good place to stock up.

Salto de soldado (Soldier Waterfall) just before the confluence
Then there is then a long stretch before you reach Salto de Soldado, an attractive waterfall in the spring months. The bottom of the falls is just off the trail but there's a very faint path off to the right that reaches it. From this point it takes about 20 minutes to the confluence of two rivers that feed into the single river the trail has been following, this marks the end of the trek.

It is possible to hire a trekking agency. Chile Off Track (tour operator) offers this tour with a bilingual guide. They pick you up at your hotel around 10.00, and provides snack package. For larger groups, they can organize a hearty BBQ! Chile Off Track also offers horseback riding tours through the Santiago´s rugged Cordillera, guided by local arrieros (cowboys). For more information and other tours visit www.chileofftrack.com or send an email to info@chileofftrack.com.