View to the Colorado river valley and the mountains to the north from the end of the hike, Sept/18

Beginning of the trail. Looking southwest, 9/18 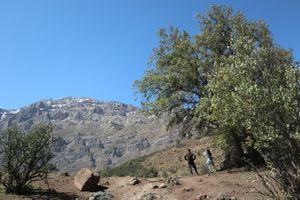 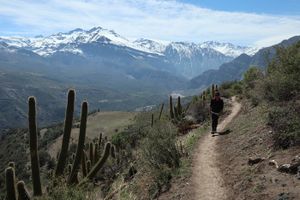 End of the ascent. The viewpoint is a short walk away, 9/18

Arriving to the viewpoint, 9/18 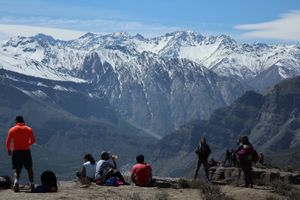 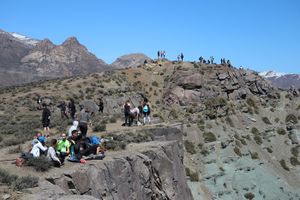 Viewpoint, a couple of steps away from the end 9/18

Hike along a clear path of gentle slope that leads to the top of a cliff, a superb location to spot condors. The birds nest just below, and fly permanently over the area, a few meters away. There is also a good panoramic view of the Colorado river valley.

Year round. Ideally during the winter and early spring. As it is a route of altitude medium-low and located in a north slope, it is advisable to avoid the hottest months, or at least start very early if that’s the case. Since 2018, this place has undergone an explosion of visitors. Hence, if what you are after is a genuine experience of pure nature contemplating condors in silence you must avoid weekends and holydays.

From Las Vizcachas junction (Avenida Camilo Enríquez and Avenida Eyzaguirre), it’s 16.8 kms of paved road along the main road of Cajón del Maipo (ruta G-25) until the Colorado river, just after which you must turn left to take G-345. From the beginning of this road it’s an extra 19.2 kms ascending along the Colorado, also of paved road, until a ravine named Trescientos (“three hundred”), where the hike starts. The beginning is very well marked with a huge sign of white letters painted on a pipe. If you go on a weekend, the start will be obvious due to the many cars parked, and the sellers of snacks and refreshments.

There is only transport to the junction of the roads G-25 and G-345. See public transport to Cajón del Maipo. From there, you can go on hitchhiking. On a weekend there is a very good chance to make the extra 19.2 kms.

Outline of the route

Profile of the walk to Mirador de los Cóndores

From the road (km 0 - 1300m) approach the pipe with the white letters. From there, the path is always clear. It’s impossible to get lost. As usually happens with popular trails, there are several small bifurcations that converge to the main trail after a few meters. Hence, there are no decisions to take.

The trail advances towards the southwest among shrubs and cacti, with moderate inclination. The first significant milestone is a plain, reached in the km 1,6 (1635m). Border it along its western flank and restart the ascent in the contiguous slope. You will point briefly to the east, in order to make an ample U-turn.

After another kilometre you will reach (km 2,6 - 1782m) a small ranch. Turn right to cross the door (it’s well signalled) and carry on to the west. A few meters ahead, on weekends, there is a vendor of bottled water. Curious, as a couple of meters beyond that the water course of the Trescientos ravine is crossed, and it’s perfectly drinkable. After the water course the ascent towards the southeast resumes. This area is more arid, almost devoid of trees and shade. The path ascends without mayor changes sided by bushes and dust. Around km 3,6 it starts to lose inclination. The cliff that gives birth to the viewpoint is already visible to the west. On weekends, a bunch of hikers will be visible resting at the very edge of the cliff. Having walked an almost flat stretch, the eastern corner of the viewpoint is reached. The end of this route has been defined, in a semi-arbitrary way, as the highest point of the cliff, located at the western side, precisely where the terrain starts to go down (km 4,49 - 2005m)