The regular hiking and packrafting route passes the Chilean border control post in Candelario Mansilla and the Argentine border control post at the northern end of Lago el Desierto. These posts are 26 km apart (shortest distance) and if you do not walk into these two border controls posts yourself you will not get the required exit and entry stamp and become an “illegal immigrant” in the neighboring country. Don’t expect anything at the border itself or to get stopped by the police in the corresponding places.

Be aware that the GPT route takes a significant detour between these border controls and crosses the actual border at an non-officil location at the Refugio el Diabolo. If you ask the border police for permission to cross the border in this location than your request will probably be denied so better don’t ask and just tell that you are on the way to the Chile/Argentina without specifying the exact route (when asking for your exit stamp).

We have taken this non-official route twice in January 2017 and January 2019 without any issue.

Worst case scenario is that you arrive with a several days old exit stamp on the other side and the border control police becomes upset and ask you to walk back on the shortest route (Option 1) to get a fresh stamp but I have not heard this happening in recent years.

According to the team of our hotel in Villa O'Higgins, we officially have 24h to cross the 2 borders. So we prefered not to take risks with customs of Chile and Argentina and walked directly from Mancilla (chilean border) to punta Norte (argentinien border). There is 21km to walk and it is very easy. After the argentinian border, we walked to the mirador on the glaciar chico. It is the last 15kms of the real section 38. The view on the glaciar is amazing there and really worth the effort. After just walked back to the argentinian border. The walk is easy with some elevation but easy. We took a path that was marked but differed a little with the gps track (maybe sometimes 300m away) and had only one easy riverford. Don't say to the argentinian customs that you were there because the mirador is officially in chile (200m after the border but without any puesto) just say that you walked to the refugio del Diablo which is on the path and 200m before the border. This refugio is very basic in metal and can help in case of rain but is not cosy at all. It is a total of 51kms and without any risk with the 2 borders but you maybe miss some other highlights of the real section 38. We did it in 1 day and a half.

Comment Jan Dudeck: In recent years we and other hikers had no issues staying several days between the Chilean and Argentine border post. Some years ago the situation was different but both sides seams more relaxed now as long as you arrive on the other side with an exit stamp.

We chose to do this hike in one long day, but were told we could camp near the Argentinian passport control, or in the sort of no-mans-land up the trail further between borders. Make sure you know what day the ferry is leaving before hiking or you could end up waiting in Candelaria a couple days! There aren't any stores in Candelaria, though we heard the lady at the campground might sell you some eggs or some other supplies. 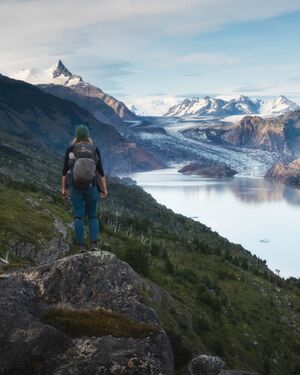 Benefits of Hiking and Packrafting

Resupply on the Trail

Notes to consider before beginning: At Calendario Mancilla, there is a Carabineros border control outpost. They asked that we fill out an expedition hiking form since the GPT follows a little used route. After discussing the route, the Carabineros informed us that entering Argentina at Lago Diablo, which is the current GPS route, is illegal. There is an alternate route, as described below, which remains in Chile that we decided to take instead.

From the Chilean border control, follow the gravel road for a short distance and turn onto a trail marked by white sign with green lettering that says “Rio Obsticulos” as shown by the current GPS track (hikers may want to consider following the alternate listed at the end of this section description to and from Glacier O’Higgins because that trail is of much higher quality, more scenic, and more pleasant than the one that follows the bank of Lago O’Higgins/San Martin).

After crossing the wooden bridge, hike along an ill-defined track that winds up and down the shoreline of Lago O’Higgins/San Martin to the land bridge north of Lago Chico. There is one residence as well as the occasional small camp spot along this route.

There is another residence located on the east side of the land bridge, and hikers may pass through a wire gate on north side of the corral. A faint trail heads west and terminates at the bank of the narrow channel that connects Lago O’Higgins/San Martin and Lago Chico. A packraft is required to cross this channel.

There is another residence on the west side of the channel. When the large ferry out of Villa O’Higgins is functional, it drops people off near this residence so they may hike the Sendero a Candelario Mancilla which is marked with orange and white blazes. This trail is well-formed and climbs the hill south of the residence. After exiting the treeline, be aware that there is limited camping for many kilometers. From this point, the route is very exposed and there is no cover until the route re-crosses Lago Chico.

Glacier O’Higgins is beautiful; it is composed of glistening blue ice that terminates into the lake. Sadly, as the University of Valdevía has documented, the glacier is receding at an alarming rate and is in danger. As you enjoy the views, the trail continues to wind up and down above the lake but eventually disappears. Navigation is easy due to a lack of vegetation, but camping is poor due to exposure and the steep terrain.

An orange refugio is located 2 km from Lago Chico on the glacial moraine. It is equipped with solar panels and is a good place to ride out a storm. The route continues down rocks and sand to the lake edge. The lake paddle is very pleasant, and depending on the season, it may involve weaving through icebergs to get to open water. Be careful not to get too close to the icebergs! Many of them are unstable and falling ice is common.

Alternate: The GPS route indicates a northbound float on Lago Chico for approximately 4 km until take-out, but high winds forced us off of the lake early. We exited at the southern end of Lago Chico and from there faced a very difficult, brushy, and steep climb up to a trail at about elevation 750 m. Weather permitting, it may be easier to packraft all the way back to the land bridge between Lago Chico and Lago O’Higgins/San Martin. The trail on east side of the lake is well-formed, however, and there is one established campsite near a run down shack at the Lago Diablo turn off.

In order to avoid the illegal Lago Diablo crossing into Argentina, just after passing a large wooden sign that says “Sendero de Chile,” turn off to the east on a well-formed track and climb up through the forest. The track is well-formed, easy to follow, and passes by several good places to camp. There are some orange and white blazes which are hard to spot because they mark the track in the opposite direction. There is a brief cross-country section over the pass through open tundra, but the trail reappears as the route renters the trees. There are a couple river crossing, and the trail ends at the gravel road. Follow the road north back to the Carabineros outpost to inform them you made it back safely and to obtain an exit stamp.

Links to other Resources

Alerts and Logs of Past Seasons